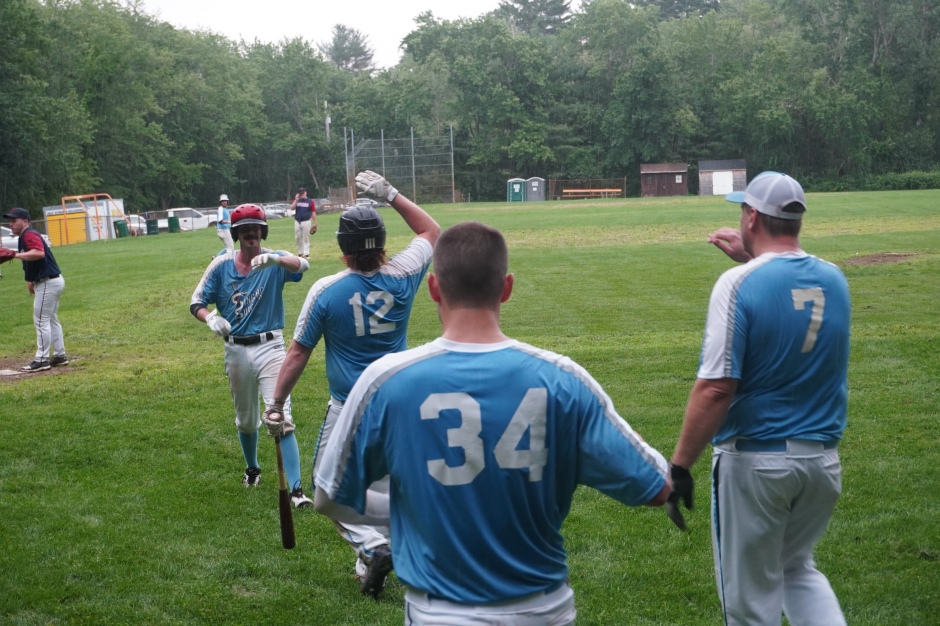 Saturday’s matchup between the Waltham Cutters (8-3-1) and Singing Surgeons (4-7-1) began under partly cloudy skies, but the weather gradually got worse. It started with a small sprinkle but quickly became a steady downpour in the bottom of the fourth with occasional lightning flashing across the sky. The umpires called the game off in the top of the fifth inning citing concern for player safety and the game ended in a 4-4 tie.

In fact, four of the five games in the Boston Men’s Baseball League 18+ division were postponed this past weekend due to inclement weather.

On Saturday, the Cutters’ offense finished with just three hits but when faced with a chance to knock in runners in scoring position, they pounced on the opportunity. Third baseman Brett Fundell launched a 2-run double in the top of the first, while All-Star first baseman Dan Wilson added an RBI single two innings later. Both Fundell and Wilson accounted for three of the seven base runners for Waltham in this contest. Additionally, they added their final run on a balk by Surgeons’ starter Zeke Golnick, scoring second baseman Tim Vardais in the third inning.

“Our plan was to be aggressive at the plate and swing early in the count (expecting fastballs),” said Wilson. “We stole 3 bases during the game to get guys in scoring position knowing it would be tough for the catcher to make an accurate throw.”

The Waltham Cutters currently sit atop of the South division but are currently just one point behind in the standings behind the Merrimack Valley Marlins (8-3). They have outscored their opponents 52-33 this season. Offensively, they are led by Dan Wilson and center fielder Adam Anderson who combined for 22 hits and 14 RBIs.

The Surgeons scored all their runs without base hits, using two sacrifice flies in the first inning and third innings and two fourth-inning wild pitches to pull even. The two wild pitches in the fourth inning were crucial because they occurred as the rain began to intensify and nobody was certain how long the game would last.

“It didn’t appear as if the weather affected things for my club,” said Surgeons’ DH Steve Pinner. “I remember toward the end telling one of the players to be ready to take an extra-base because the opponent had to pick up a wet baseball to throw.  We saw this with the increase in wild pitches as the game progressed.”

Sitting at 4-7-1, the Surgeons will look to earn their first win since June 26 when these two teams next meet again on July 22. On the mound, their rotation is led by Jack Stockless, who has started the season with a 3-1 record, a 2.95 ERA, and 14 strikeouts on his way to being named to the MABL 18+ All-Star team. Stockless leads the staff in wins and strikeouts. All-Star center fielder Peter Blunt added two more hits, helping take over the team lead in hits with 10.

“Top to bottom they were making solid contact and spraying the ball all over the field,” said Cutters All-Star RF Ryan Fleming. “Even the plays we were making were on hard-hit line drives or sharp grounders.”

Both teams are set to face off again on July 22 and 24. Waltham defeated the Surgeons in their first matchup this season, 10-5 on June 5.