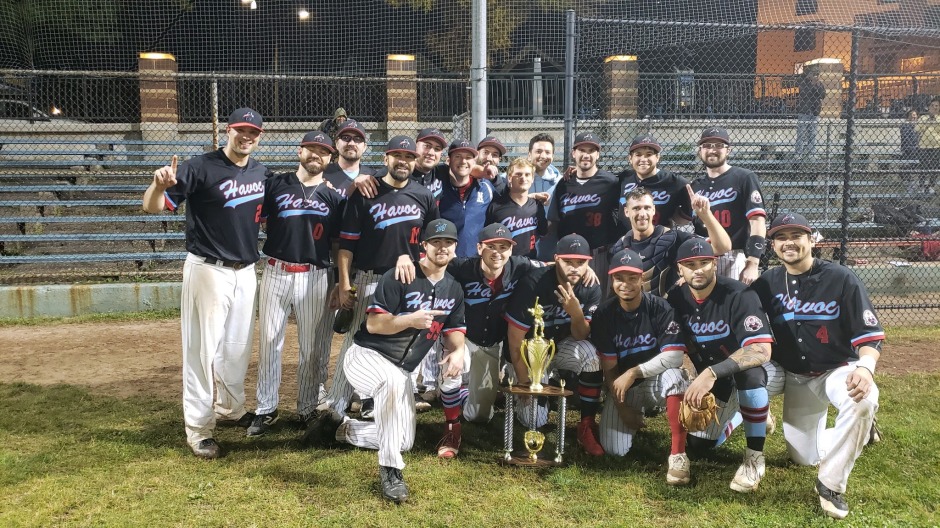 One year ago, the Boston Sox, now called the Boston Havoc, watched the MABL 18+ championship slip away as they fell three games to one to the Middleboro Mocka Rays. They were outscored 15-7 in that series, including 9-0 in the final two games. This postseason, the Havoc went up two games to one against the defending champions, but lost game four, 2-1, on October 7. As a result, a win or go home contest was necessary to decide the MABL 18+ championship.

The Havoc scored all nine of their runs in the first three innings, which was highlighted by a six-run second inning. Their offense finished with 14 hits, including five by corner outfielders Ramelo Carbuccia and Nick Powers who combined for three RBIs. The Havoc outscored the Mocka Rays 23-4 in this series to secure their team’s third MABL 18+ championship in team history. Their other titles were at the conclusion of the 2013 and 2018 seasons, when they were known as the Boston Sox.

“Right out of the gate they brought the energy,” said Mocka Rays catcher Derek Pizzaro. “They were ready to go right out of the gate and didn’t waste anytime, which is what you need to do in a game situation like that. It was a quick momentum grab, and they never came close to giving it back.”

On the mound, starter Jon Shepard fired a two-hit shutout, striking out seven Mocka Rays in the process. This was his second consecutive complete-game win of the series, as he allowed two runs in Havoc’s 6-2 victory in game two. The Havoc surrendered two runs or less in every game this postseason, losing their only two playoff games to the Mocka Rays in this series.

“He’s able to dissect hitters at a level you don’t always see in men’s leagues,” said Pizzaro. “Getting to see him throw when it’s not at you is a treat and it’s fun to play behind him. When you are playing against him it’s a tough night at the plate and my 0 for 3 the other night would prove that to be true.”

“It goes right back to my team having my back in the field,” said Shepard. “I like to keep them involved. I never to try and strike people out.”

This was coming off a regular-season campaign, where he finished with a 4-1 record, 0.66 ERA, walking two hitters, and striking out 42 in five starts. Four of his five regular-season starts ended in complete-game wins for Shepard, most on the staff. In the post-season, he elevated his game to another level by allowing four earned runs in 30 innings pitched, which included two complete game wins.

“I think historically, even when I was a little kid, I always pitched better in the big situations,” said Shepard. “I always get more enjoyment going against the better competition.”

Shepard kept a Mocka Rays’ lineup in check that led the MABL 18+ division in runs scored (184), walks (84) and batting average (.378). Middleboro outscored their opponents 185-44 during the regular season on their way to securing the number one seed in the MABL 18+ playoffs with a 19-2-1 record.

In addition, Shepard pitched for the Boston Athletics (21-4-1) of the Boston Park League this season. He finished with an 8-0 record, 0.37 ERA, and led his team in strikeouts with 50. He surrendered a total of six runs in nine starts in that span to help earn the CY Young Award.

“Historically, he has dominated in both the regular season and the postseason and has several championships under his belt,” said Dan Field, the Boston Men’s Baseball League playoff color commentator. “I’ve only faced him once or twice in my career but I believe he has 3 pitches in his repertoire, with his slider being his best pitch.  As a broadcaster positioned behind home plate, I got to really see exactly how much his slider moves and why it’s so effective in getting batters to chase balls outside the strike zone.”

With the Boston Men’s Baseball League postseason now finished, the 2021 BMBL League Banquet is scheduled to take place on October 27 at 7 p.m. at Game On! Fenway.